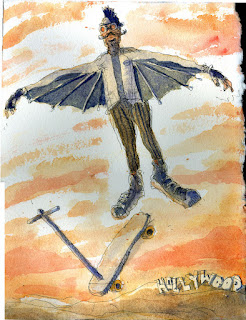 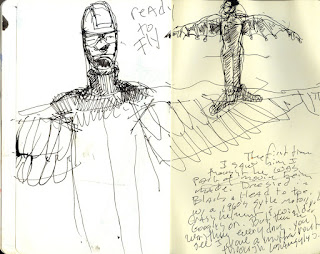 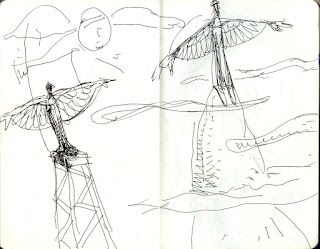 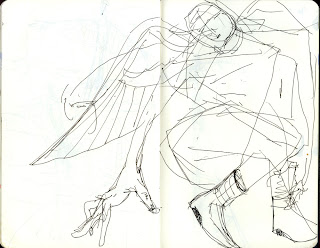 The first time I saw him I thought that he was part of a movie being made. Dressed in black, head to toe, 1960's style motorcycle helmet, black gloves with the fingers cut off, wielder's glasses on. But then I started seeing him almost everyday, early in the morning on a busy street.  You see I drove a muffin route 3 days a week through Los Angeles, Hollywood and beyond. He was part of that beyond as he rode a home made push scooter with a broom stick handle and skateboard wheels. There was a fine layer of city grit on him.  Who was he?  Then one day he revealed himself as I was stopped at a traffic light. I looked at him and this time he looked back at me.  Our eyes meet.  He smiled an uneven grin and raised his arms to reveal wings made of old umbrellas.  The light changed to green.  I drove on and I assume he flew off for I never saw that batman again.
Posted by Bill Jaynes at 6:14 AM

Email ThisBlogThis!Share to TwitterShare to FacebookShare to Pinterest
Labels: IF, It Happened, Sketchbook

It is a good story, like reading one of my own. All these excellent strangers...

He was you.
Your alter ego; perhaps what YOU really wanted to do instead of hauling muffins through the streets of LA at 3 in the morning.
When your eyes met the laws of physics did not allow to you and your doppelgänger to be aware of each other at the same time.
One of you had to disintegrate.
Lucky thing it wasn't you.
(this time)


I love the hand at the bottom of the last drawing.

So when is your book coming out? You have wonderful stories, Bill, and they compliment your illustrations so well.

This character is very intriguing, and so totally L.A. It's just as likely that you spotted him in Venice.